One cycle ends, another begins 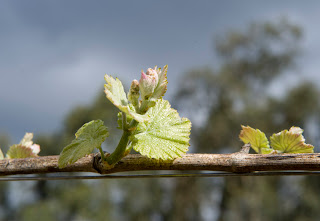 One of the other wine blogs that I follow is that of my friend Kirk at Sandihurst Wines in New Zealand (see my list of Links). A day or two ago they picked their first grapes of the new harvest; admittedly these were Pinot Noir and not a white varietal, but they were still grapes to be used for making wine.

Anyway, my point is that just as their vines are coming to the end of their cycle, ours are just starting to spring to life. I can assure you that the above photo was taken this morning – having compared it to photos from previous years, the new shoots all look pretty much the same. The really interesting part is comparing the date on which the photos were taken each year.

In this new digital age our cameras record all the metadata that we could possibly wish for, including (if you have the attachment), the exact GPS location of where the picture was taken. Hardly useful when you’re only standing outside the back of your own bodega, but I guess that if you were on a photoshoot in the Namib desert then it might be worth the extra investment. In fact, just about the only information that it doesn’t give is what the photographer had for breakfast!

So, studying the dates of photos taken in recent vintages it would appear that in 2010 we are just a little behind schedule – perhaps a week later than recent vintages, and almost two weeks later than in 2007. This could result in a harvest towards the end of September, but we will probably have a more accurate forecast once the flowering takes place.