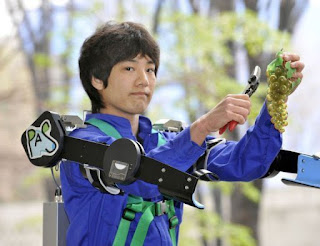 I have to start by telling you that this photo was not taken in our vineyard. Indeed, I rather suspect that the young man in the shot is not Galician either! This picture does however represent, perhaps, a glimpse into the future of fruit gathering….

It shows a postgraduate student from Tokyo university wearing a motorised exoskeleton that has been developed to help ageing workers endure the strain of their labours. Apparently nearly two thirds of Japan’s farmers are aged 65 and over, so in order to help those aching joints the department of Agricultural Technology has created this special robotic suit designed to boost the wearers strength by more than 60%.

Using movement sensors, voice recognition and eight electric motors, the machine is designed to ease pressure on the joints and assist muscular activity when bending, crouching or lifting. After 15 years of development it is expected to go into production within the next 12 months, and further enhancements are also planned – augmented reality goggles may inform farmers about the ripeness of their crop, their heart rate and calorie consumption etc.

Industrial robots have long been common in Japan, and these robo-suits are already making inroads into hospitals and nursing homes where they can assist not only in moving and lifting patients, but also in aiding rehabilitation exercises.

Whilst we already use battery operated shears for pruning, at a cost of around $11,000 each, we have no plans to buy any skeletons in the near future – motorised or otherwise!