Is winter finally behind us? 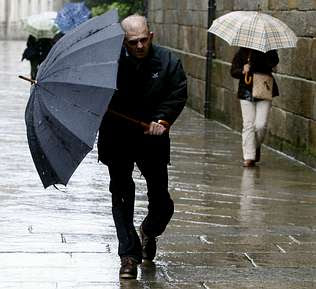 Well, Easter has come and gone, the clocks have been put forward, and winter has officially ended – on paper at least. From comments I have been making over the last few months you would be forgiven for thinking that we have had a seriously wet winter, but according to official figures rainfall has been only slightly above average. Temperatures too have been only one degree below the norm, but by far the most significant feature of this past winter has been instability – the most volatile and changeable for more than 10 years. In the last three months Galicia has witnessed two hurricanes, three small tornadoes, heavy snow and flooding.

Without getting over complicated and discussing Arctic oscillations etc., suffice to say that our usual winter airflows were sometimes replaced by much more unsettled and variable southern circulations, bringing with them rain, high winds and storm conditions. When air masses did arrive from the north, almost directly from the pole, the mercury plummeted, and parts of Galicia experienced record temperatures of -12C. So, yes, it would be fair to say that we had an unsettled winter.

Since the beginning of April we have seen a change to more favourable conditions – dry and sunny. The pruning and tying of vineyards is all but finished, just as the first shoots of the new season really start to push forward.

Whilst speaking of April, I should perhaps explain that my post on the first day of the month was indeed an April Fool’s joke…. we are NOT making a rosado wine, and never will (not that orders were exactly flooding in)!