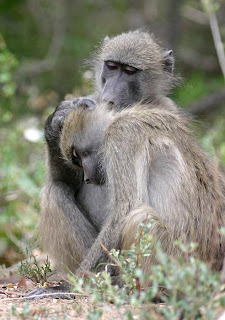 No, I’m not being rude, the baboons really are stealing – not that this is anything new. Tourist offices around the world often issue warnings to visitors about the aggressive behaviour of these primates. They advise people not to stand around with food in their hands or leave the car with open boot (trunk), windows or doors. They also tell you that baboons will steal food and bags from inside the car, and of course, that you should take extra care when planning a picnic – these animals will simply run up to you and grab your food! The more you feed them, the more bold and aggressive they become.

Unfortunately the problem has now spread to wine country – Chachma Baboons in South Africa’s Western Cape wine region have recently developed a taste for Chardonnay grapes and are terrorising farmers, munching their way through tonnes of grapes that are ready for harvesting. Farms in the Franschhoek Valley have been devastated by rampaging baboons, who sneak into secured plots and help themselves to top grade grapes. In some cases up to 40 percent of the harvest has been lost!

I have read that there are apparently only 360 baboons remaining on the Cape Peninsula. They have been there for hundreds, if not thousands of years but are now threatened due to conflict with humans. It goes without saying that the conservationists are keen to protect the last baboons on the tip of Africa, but at what cost to the wine producers?