A storm in a tea cup 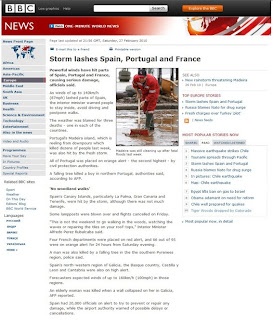 Strong winds, driving rain, a little flooding, a few fallen trees and some very minor structural damage – that’s about the extent of the problem caused by yesterday’s storm.

Having said that, 3 people did lose their lives across Europe – two killed by falling trees, and one woman, here in Galicia, killed when a wall collapsed. During the height of the storm some gusts were recorded at up to 150kph (just over 90mph).

So the alerts and warnings were mainly precautionary, and to be honest you can not blame the Spanish government for being over cautious. Much better to be prepared, and ‘batten down the hatches’ than to be taken completely by surprise, as famously happened in the UK at the end of the 1980’s.

On that occasion a BBC weather forecaster publicly dismissed a severe weather warning that had been isssued by his counterparts in France. That night a mini-hurricane swept across the southeast of England (including London) leaving some fairly major destruction in it’s path.

What is it they say? Better to be safe than sorry.