More than just a pretty face! 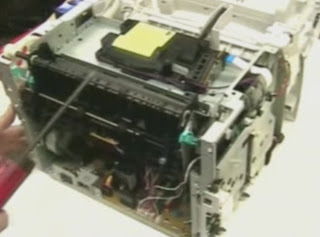 The other day Angela’s beloved desktop laser printer started chewing up the pages she was trying to print. To be very honest I was not surprised for one moment, as she does insist on shoving re-cycled paper into the poor thing. Of course using re-cycled paper should only be applauded, but not when the second-hand sheets are creased, folded or occasionally included the odd staple! So, the obvious solution was to look for some sort of paper jam, but regrettably, this revealed nothing….

Now, I am a great believer in internet forums, and wasted no time in visiting the site for this particular brand of printer – the prognosis was not good – it looked like the fuser film sleeve needed replacing, simply through old age (don’t worry, I had no idea what this was either). I had no doubt that the cost of sending the machine away for repair would be more than it’s replacement value, which left me with only two options. Either scrap the machine, or try to repair it myself, assuming I could find the part – more websites.

I eventually stumbled across a site not surprisingly called ‘fixyourownprinter.com’ in the United States, that could send me the repair kit for only $46 + postage. Believe it or not only 3-4 days later, I had the replacement fuser film sleeve in my hand….. but that was the easy part!

Fortunately the kit included a blow-by-blow DVD, like an idiots guide of how to attempt something really difficult (actually 7.5 out of 10 on their difficulty scale), but as I had absolutely nothing to lose, I thought I would give it a go.

After about an hour or so, I had the printer in pieces, screws and brackets everywhere, covering a fairly large table, and I was filled with trepidation as I realised that I had to put them all back together again!

I shouldn’t have worried, after another hour and a half, I plugged it back in, and presto, one restored printer. Of course my repair comes with a 20/20 guarantee – 20 minutes or 20 printed pages, whichever comes first – but it did fill me with a certain satisfaction, even if it does break down again next week.