Can man and fish co-exist peacefully? 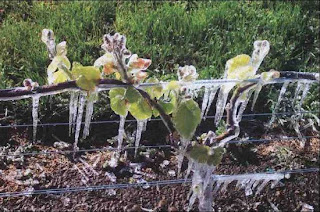 It was our old-friend George W. Bush who once curiously declared, and I quote, “I know the human being and fish can co-exist peacefully.”

Wrong George!….. Why not ask the poor fish that are having problems with the grape producers of Sonoma County, California?

Growers in this part of the world use a method called ‘ice encasement’ to protect their vines from late winter, or spring frosts. More specifically they are protecting the new buds and young shoots at the beginning of their growing cycle, as they will simply die when the weather dips much below freezing. For those who may not know, this is how the system works:

Well before the vines reach freezing temperature, water sprinklers or ‘misters’ are activated in the vineyard, coating the vegetation with a film of water. As the temperature drops below freezing, the water starts turning into ice, and given a little time, quite a thick coat builds up. This coating of ice actually keeps the vegetation at, or just below freezing, thereby preventing tissue damage in the young shoots.

So how does this affect the fish I hear you ask?

2008 and 2009 were both drought years in Sonoma, and as water was pumped from local streams and rivers to use as frost protection, so the water levels dropped. The unfortunate consequence of this was the death of hundreds of coho salmon and steelhead trout as the lack of water stranded the poor fish. Whilst the coho have a habitat that stretches from Alaska to central California, and still thrive in Alaska, their once plentiful stocks in California and Oregon are now under threat, and therefore new regulations are being proposed to restrict the amount of water that can be used. Quite naturally the growers of this cooler part of Northern California are not happy.

So here we witness a conflict between man and fish – the livelihood of the grape grower, against the survival of a species, and I have absolutely no doubt that in this case, the fish will win.

And no George, we didn’t misunderestimate you!