Snowed under…. in paperwork! 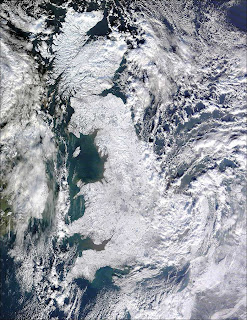 Frozen Britain
As large swathes of Europe grind to a halt in blizzard conditions, the snow that was threatened around the city of Pontevedra came to nothing more than a very light ‘dusting’ – hardly enough to break out the snowboard….
Sure, it’s been pretty chilly for the last week or so, with frost nearly every night, but nothing like the -21°C experienced in Scotland recently – colder than the average domestic deep freeze, and on a par with the South Pole. Indeed such extremes of temperature bring problems that are not encountered in normal everyday life, such as the diesel in the tank of your car turning to jelly!

So, where does paperwork enter into the story? Well, it’s just another example of the incredible volume of admin and/or beaurocracy that is sometimes required to complete even a very trivial task in this country. To cut a very long story short, I went to our local hardware store to collect an electric drill that had been left for minor repair (annoyingly just out of warranty). On face value, a simple task…. or so I thought.

After one hour, involving two people, visiting two offices, necessitating eight sheets of paper (six A4 size), and then signing two of them, I was finally presented with the invoice……. 23 Euros + tax!!!! You have to ask yourself the obvious question – how on earth can this be cost effective?