The first frosts of winter 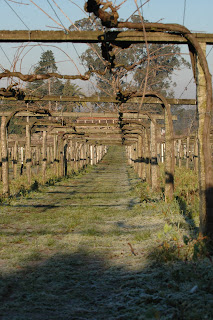 For the whole of November and the first half of December the sun never appeared in Ribadumia, instead only grey sky and a lot of rain.

Apparently this had something to do with the wind direction. Blowing from just off the coast of West Africa, these extra mild winds were able to carry a lot more moisture than the more customary, cooler winds from the north. True, the temperatures have been mild, rarely dipping below 9 or 10°C (even at night), but boy has it been wet, even by Galician standards.

It was actually the 14th December before we witnessed the first clear skies and touch of frost, but only in very sheltered, low-lying areas. This of course provides the ideal weather for pruning which is now under way in our vineyards. As I know I have written many times before, far better to be pruning in a bit of mild winter sunshine, than with rain beating down in your face!

It would appear that many other parts of Europe have also been affected by this cold snap, with many countries suffering heavy snow and freezing temperatures. I guess we should at least be thankful that we have not been stranded on a train in the Channel tunnel for hours on end, like some other poor souls over the weekend…… What a nightmare!