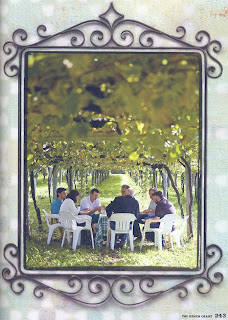 We have a friend in Melbourne who runs one of Australia’s best restaurants, that just happens to be Spanish. His name is Frank Camorra, and his restaurant is MoVida (also MoVida Next Door, which not surprisingly is located immediately adjacent to the main restaurant)

Over the last few years he has made several trips to Spain, touring the countryside, gathering information and recipes etc., compiling books about Spanish food. I hesitate to call them recipe books, because in reality they are much more than that – Frank delves into the background and traditions behind the food that he includes, meeting the local people who cook the dishes as part of their daily lives. Not professional chefs, but ordinary people who prepare local fare using methods handed down over generations.

The latest of his three books, just released, is called Movida Rustica, and is co-authored by Australian food writer and critic, Richard Cornish.

Whilst we are not mentioned by name, we are actually pictured picnicking in our ‘El Pazo’ vineyard, tucking into some great local dishes such as ’empanada de vieiras’ (a corn pie made with fresh scallops). I know that I say it every time, but I will say it again – a perfect dish to eat accompanied by a glass of Castro Martin albariño.

In the picture taken from the book, you can just make out Angela on the left, and see the back of my head (which many say is my best side!)