Dope on a rope! 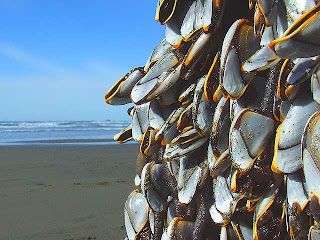 Now, I really like Gordon Ramsey, albeit that times have been pretty tough for him in the last year or so. I always think it’s a bit of a mistake when a really talented chef leaves his kitchen and starts empire building – effectively risking his good name and reputation. It rarely seems to work, and usually the only thing that appears to suffer is quality. Almost an inevitability when you stop and think about it.

You can therefore imagine my surprise to see him on TV, dangling from the end of a rope at the bottom of a 300ft cliff in search of a Galician seafood delicacy – Percebes, otherwise known as Goose Barnicles (or maybe dinosaur feet as one of my friends calls them). In fact, swinging at the end of a rope he looked more like the bait than the fisherman…. it was quite dramatic.

Filming for his Channel 4 series ‘The F Word’, I think it’s fair to say that he used more than his fair share of expletives as the crashing waves smashed him against the rocks. In the circumstances I can hardly blame him. Ironically, after a small degree of success he was finally submerged by one huge wave that swept away his precious harvest. I doubt if he will be doing that again in a hurry!

And so back to the Perecebes themselves. An expensive delicacy on any dinner table, and when you see how they are harvested you may begin to understand why. Apparently the Galician coast is especially suited to this type of barnacle, as the fast flowing waters of the Atlantic ocean against the rocky outcrops make the necks of the percebes stronger, fatter and therefore tastier to eat. I have been lucky enough to savour them on a couple of occassions, and when they are really fresh, the flavour of the sea literally burst from the necks as you bite into them….. delicious!

Of course, as always, I can’t close without reminding you that they are alsolutely perfect to eat accompanied by a refreshing glass of Castro Martin albariño.