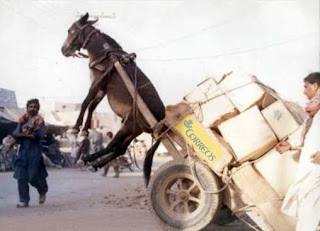 I am usually the first to criticise the Spanish postal service (joking that they must still be using donkeys to move the mail), but on this occassion I find myself obliged to compliment them on a small but significant event.

A couple of days ago I signed a batch of Christmas cards to send out to friends and family, anticipating that they might take a couple of weeks to reach their various destinations around the world. They were posted (using a standard service) on Monday, and so imagine my surprise when, only two days later, I was speaking to a contact in England and they thanked me for my card! My astonishment that they had arrived so quickly was however tinged with a small concern. That my friends might consider me a very ‘sad’ person for sending out my Christmas cards so early (I just call it being organised, and that’s my excuse)!

To balance my story I still have one small complaint about the courier services in this country…… Yes, they do work, but then fail miserably when it comes to updating the tracking information on their websites. It’s as if your package disappears into a black hole when it reaches the Spanish border, at least until the moment that it arrives on your doorstep. At this very moment I am tracking a parcel that started in Hungary (don’t ask), moved on to Austria and then Germany, where it boarded a plane to Spain where it disappeared two days ago.

Maybe the European Community has developed it’s own ‘Bermuda triangle’ – possibly the same place that they send all our taxes!