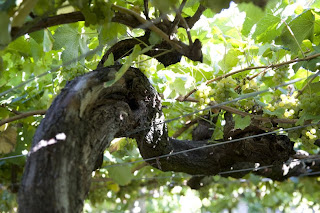 No, I’m not refering to crispy chicken fajitas or enchiladas, but to our largest vineyard which is affectionately known as ‘El Pazo’. It’s real title is the Pazo de Barrantes, but we usually do not refer to it as such because Marques de Caceres (the Rioja producer) actually owns a bodega in the Rias Baixas denomination which sells a wine by that name. Indeed, to cut a very long story short, the 5 hectare ‘El Pazo’ vineyard was orignally owned by them, but was sold to Angela’s father many years ago.

So, back to the story – the Pazo vineyard includes some of our oldest vines, many around 70/80 years old. Of course these are picked seperately, pressed seperately, vinified seperately and the resultant wine is reserved for our Family Estate and Barrica labels. Unfortunately, with each year that passes the yield of these ‘old vines’ decreases until eventually we have to pull them up and replace them with new cuttings taken from these old, original plants. On the positive side, this is a continuous cycle, so there are always more ‘old vines’ evolving (if that makes any sense).
Meanwhile down in the cellar, we have started to ‘rack’ the clean grape must after settling. The juice which is drawn off is perfectly clean and clear, and actually makes quite an attractive drink as it is. It has the typical intense, slightly floral fruit of albariño, but then of course, it also has quite a high acidity, some of which will be lost during fermentation, and later during cold stabilisation.
The picture below is not a dirty cathedral window, but is actually the sludge which is left at the bottom of the tank after settling (photo taken from above, looking down into the tank). Very pretty, but you wouldn’t want to drink it! 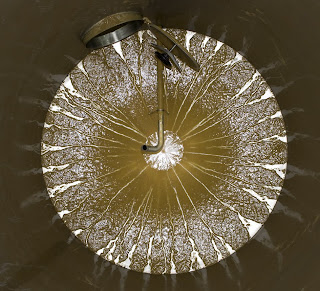 Back up in ‘grape central’ (reception), the fruit is still piling in, but somehow without too much fuss and excitement – all appears very calm and controlled. To put this into context, our sixth pressing on day four finished two hours earlier than our sixth pressing on day one – it would seem that all the first day cobwebs in our performance have been swept away, and we are now operating like a well oiled machine!