The harvest begins (with apologies to the press) 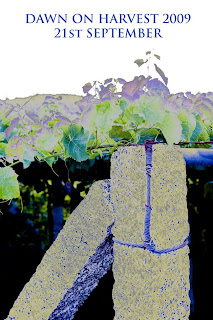 I start this year’s harvest story with an apology…. to our local press. A month ago they proclaimed that our harvest would start on 20th September, and I mocked them openly for being so presumptous. How could they possibly know so far in advance, I joked.

Well, the egg is on my face now – we have started on Monday 21st September, as I now realise that our local journalists must have much better connections than I thought, perhaps even divine!

Anyway, the first grapes were collected under a milky blue sky – at 8am when I took the photo above, we had 13°C (55°F) with 67% humidity, and a little later at midday, 26°C and 38%.
Now I don’t wish to be a weather bore, but it’s really interesting when you compare several different weather websites for the same location (as is my current mission in life – sad, but true). For example, three sites say tomorrow will be sunny, one says complete cloud cover. Two or three say sun for the rest of the week, another says rain at the weekend. Should it be majority rule, or do I take a mean average, that is the question? Of course we watch the barometric pressure too, but being so close to the Ocean, that can, and often does, change rather quickly.

So, enough about that, what about the grape ‘must’? Well, as the first grapes entered the press, and the first ‘free run’ juice trickled out, the smell of fresh fruit in the press room was much more prevalent than last year, with a slight floral touch – this impression was confirmed in our tasting – delicate, floral Albariño fruit.