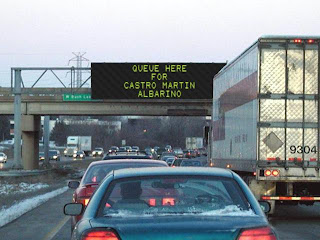 It was only a day or so ago that I mentioned the traditions of our region, and the fact that rightly or wrongly, there are some habits that just don’t change no matter how little sense they appear to make.

Today’s topic is the timetable of holidays – not just here in Galicia, but throughout Spain, France and one or two other European countries…….. The mass exodus (and return) that takes place during the month of August, wreaking havoc on roads, as well as at many local and international airports.

In Spain this is compounded further by an even bigger curiosity – the apparent obsession with ‘quincenas’. Simply explained, the Spanish tend to take their breaks in fixed, fifteen day (quincena) blocks, either from 1st to 15th August, or 16th to 31st August. These fixed dates appear to be widely accepted by all, and it is rare that a traveller would journey either earlier or marginally later to avoid the rush.

Of course there are many compelling and perfectly logical reasons behind the big August break, but it does also have a few drawbacks.

In a business with a production line for example, it makes perfect sense to switch off the machines and send employees away for a month, thus getting the entire holiday allocation out of the way in one fail swoop. In addition, it is also extremely convenient if you have children at school and you are therefore obliged to go away during school holidays (albeit at greatly inflated prices).

In the case of a large, centrally located city such as Madrid, it is more a case of escaping the suffocating heat, which often exceeds 40°C at the height of summer. So yes, there are many good reasons for shutting up shop in August.

On the flipside, possibly the most serious downside to closing a business in August is the enforced disruption in supply to customers – obliging them to stock up on your particular product in advance of the closure. In the case of Castro Martin we do not close our doors at all, except that during the harvest period we ask our cusotmers to avoid placing orders where possible (for obvious, operational reasons).

Finally, and perhaps most significantly, there is the traffic, which for the reasons I have outlined above, tends to circulate en masse. Personally, I try to avoid crowds and queuing at all costs, but if I found myself sitting in stationary motorway traffic it would certainly take the gloss off any relaxing break, and only serve to restore my blood pressure back to it’s usual pre-holiday high!