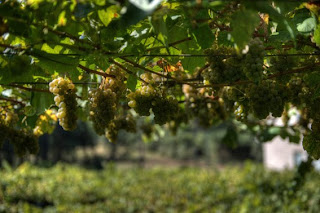 It is with great interest that we hear on local media that the ‘official’ date of our harvest has already been decided…. a month before the actual event!

Now this comes as no great surprise to us, as in the past we have heard some incredulous tales of how the harvest date has allegedly been decided by some other Bodegas in our denomination. My personal favourite (rumour, it has to be admitted) was that one large Bodega employing it’s function rooms for weddings, decided that they would not start picking grapes until after the ‘wedding season’ had finished…. Nothing to do with the maturity of their grapes or the prevailing weather, simply that it fitted in with their wedding diary!

The fact that a date has now been broadcast on local TV (so far in advance) is perhaps an illustration of the ‘traditional’ approach that many in our region still apply to their winemaking. This serves to highlight just one of the differences between old world and new, whereby the new world approach to winemaking appears more scientific, and decidedly less haphazard. Having said that, there is no doubt that many of the more innovative Bodegas in our area now have a much more serious attitude, and indeed there are at least one or two that employ overseas wine makers.

Wouldn’t it be ironic if, after these comments, we did actually start on the 20th…… follow our blog in the coming weeks to find out.