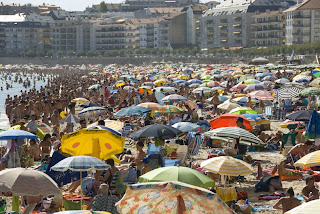 Today’s photo was taken on a popular Galician beach at the weekend, although ‘popular’ might be something of an understatement! This is truly my idea of hell…..

Galicia has more than 1,000 km of coastline, with four absolutely beautiful Rias (estuaries). These dramatic ‘Upper’ and ‘Lower’ Rias are dotted with literally hundreds of tiny beaches, and even at the height of summer it is not too difficult to find a small, relatively desserted stretch of sand. If you are lucky enough to own a boat you might even have an entire beach to yourself.

The resort of Sanxenxo shown above, has been described by some as the ‘St Tropez of Galicia’, although I rather suspect that the people who suggested this may have never actually visited the Côte d’Azur. For me, the only significant similarity is that they both have sand, although from seeing the photo, you may just have to take my word that Sanxenxo really does have sand.

The conclusion is that, yes, Galicia is a great place for a holiday, with fantastic seafood, and let us not forget, a pretty good white wine to go with it. It is still a largely undiscovered corner of Spain, and does not as yet, attract hordes of foreign visitors (numbers are, however, gradually increasing).

One small footnote: English speakers beware – there are not large numbers of local people who will understand you, and shouting will not help!