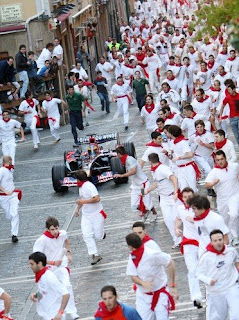 A bull with four wheels is safer than one with two horns….

It’s that time of year again, when a young man’s thoughts turn to dashing down the streets of Pamplona ahead of twelve rampaging bulls. For some this will represent the ultimate macho adrenalin rush, whilst for many others, it is just plain stupid.

Only yesterday a Spaniard, and American and an Irishman (no, this is not the opening line of a joke) were admitted to hospital with minor injuries, only one day after a man was tragically gored to death. He was the 15th person to die in the annual bull run, and the first since 1995 when a 22-year-old American was killed. For some reason the Americans have faired rather badly in this festival, as it was only a couple of years ago one poor fellow from New York was paralyzed from the neck downwards.

Here in Galicia we have our own, marginally less dangerous, ‘festival’ that takes place at the beginning of July – the Rapa das Bestas – horse wrestling to you and me! As ever, I have no doubt there will be some tenuously humane justification for the event……..

Of course, dangerous sports have been around for centuries, and have not only included the likes of bull fighting and bull running, but also wild adventures such as the infamous Cresta Run, where participants hurtle at high speed down a track of solid ice on not much more than a converted tea-tray!

The modern era of extreme sports was probably brought to the fore by the invention of bungee jumping in the late 70’s, and now includes an endless list, such as base jumping, hang gliding, extreme ski-ing and golf (did you realise that 5% of all lightning related deaths take place on the golf course?)