Spam – don’t you just love it? 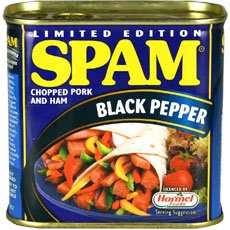 I am not sure which amuses me more – the fact that the senders of Spam and Phishing mails think that you are stupid enough to believe them, or the fact that there are actually people who do believe them. (Of course there those who respond just out of mischief, with websites dedicated to the humorous exchanges of correspondence between them, but this is not my point).

If you, or someone you know, suddenly inherits $30 million, would you seriously send out blanket e-mails on the internet inviting complete strangers to share in your good fortune? I think not. It’s as good as saying “you don’t know me from Adam but I want to give you lots of money, and all you have to do is send me all your bank account details”!

On top of this you have the strange use of English (even though the sender has an English name, claims to be a native speaker, but oddly enough lives in Nigeria), not to mention the dodgy addresses and peculiar arrangements for tranferring money. It’s all just a bit too far fetched.

I must confess that I am very often tempted to reply myself, but merely to ask if they really think that I am terminally stupid!

Recently, I have received a new variation on the $30 million mail, which is perhaps a little less ambitious. It claims that the sender has tasted our wine and is desperate to buy some for his or her forthcoming wedding/birthday/barmitzvah or whatever. They start by saying that they are currently on holiday, which I guess might be to disguise the fact that their e-mail address does not match with the fact that they claim to be American. (All of the versions I have seen so far claim to be American, but usually with a very odd or suspicious name, coupled with an appalling grasp of the English language). Despite being ‘private’ individuals they tell us that they have all the shipping and documentation organised, and that all we have to do is leave $30,000 cash in a brown envelope, behind the dustbins outside Kings Cross railway station……

OK, so the last part is not true, but as you can imagine, the payment method that they suggest is never straightforward, and I rather suspect would entail sending them all my bank account details.