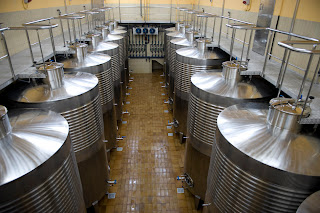 So, after months of heartbreak, anguish and general disruption, we are finally almost 100% fully operational again. Trying hard to look at the positive side for just one moment I believe that we have probably emerged from this catastrophe slightly better equipped than we were before.

In repairing the tanks we have taken advantage of the opportunity to upgrade our equipment slightly, all of the modifications designed to benefit our wine both in the short and long term.

Firstly, the new cooling jackets (the original cause of the accident) have been improved, and we are told that they should now give us better and more efficient control of the temperature in our tanks. It is difficult to see from this photograph, but the ribs of each jacket have a greater circumference than before, thus allowing a more efficient flow of cooling fluid around the cellar. This claim is as yet untested as we still await for the tanks to be connected…. so fingers crossed.

In addition, we have also completely replaced the lid of each tank with a brand new closure that is apparently more airtight than the previous version (those removed were the originals from 25 years ago).

Every tank now has a ‘manhole’ to allow full access for cleaning, and the final touch is a new ‘non-drip’ tasting tap on the front.

I am not saying for one second that we are happy with what happened at the end of last summer (the logistical problems of moving wine around have given us both sleepless nights), but at least we have reaped a few small benefits from the whole experience.