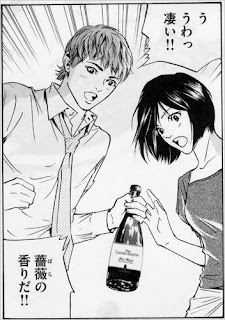 Angela and I practice our Japanese over a bottle of Castro Manga!

In the last couple of weeks Angela and I have attended two different export seminars organised by our local D.O. office, in conjunction with ICEX (Wines from Spain) and IGAPE (the local Galician export office).

The first was giving advice on how to export to the U.S. market, including information on forthcoming Rias Baixas promotions. Today it was the turn of Japan, which for me at least was the more interesting of the two – not necessarily because it was a better presentation, but simply because I know much less about the Japanese market. For example, I didn’t realise that the Japanese are very much into wine education, and spend possibly more time studying about wine than they do actually drinking it. Although wine is something that is not necessarily considered to be a particularly ‘cool’ drink by young men (who prefer beer and whisky), it is perhaps surprisingly drunk more by young women. However, of even greater surprise is the fact that wine has now even penetrated the highly fashionable world of Manga comics, as part of a series called ‘The drops of the Gods’.

Aside from all this, I should also tell you that there were two other things that struck me about both of these half-day presentations:

Firstly, it was the actual number of participating speakers (which for at least one presentation possibly outnumbered the audience)! Secondly, and most surprising to me, was the importance attached to the meetings by our local press. Now, I am not sure if it was a quiet news day, but today I counted no less than three local television cameramen and six press photographers who entered the room at different points during the proceedings. I think at one point we even had the strange senario of one cameraman filming another!

So stay glued to a TV screen near you (assuming that you live in Galicia), and you might see us adding a few seconds to our ’15 minutes of fame’. Alternatively, watch out for us in your next Manga comic!