Their first holiday in years 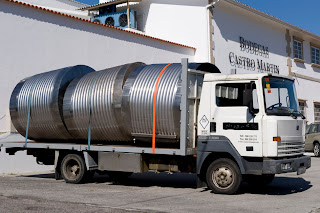 Now, everybody loves a good day out from time to time, but imagine if it was your first day out in over 25 years! I guess that’s how the tanks atop this truck must feel, as they see daylight for the first time since the wine cellar was built by Angela’s father back in the 80’s.

Quite frankly our cellar looks like a bomb has hit it, albeit a bomb that has destroyed the tanks in rather neat sections. There are pieces everywhere, and it’s probably going to be a month or two before we see some semblance of order restored.

Meanwhile, over in Australia (sorry, I couldn’t think of a witty link) there is a big debate raging at the moment about the authenticity of the Albariño clones that they are using to make their wine. Indeed, doubts have even been cast by some as to whether they are actually Albariño, saying that they could possibly be something similar, such as Savagnin from the Jura region of France.

In a recent Decanter article written by one of Australia’s top journalists Max Allen, you will note that Angela’s opinion has also been included.