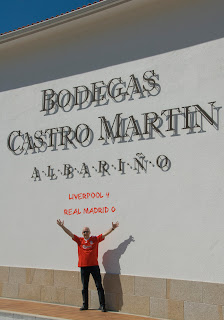 By way of a change, I thought that today I would ignore the work that continues in the bowels of the bodega, and instead celebrate a famous (and historic) victory.

For those of you who have no interest in football (soccer to some of you), you may not know, or even care, that my beloved Liverpool FC last night thrashed one of the world’s most famous teams in their Champions League encounter. There is a sort of irony that the Liverpool team not only have a Spanish manager, but actually fielded more Spanish players than Real Madrid in both the home and away matches of this tie (much to the chagrin of a certain Mr Blatter).

I make no apology to the anonymous person who complained about me featuring a non-wine subject in our blog the other day, but inflicting Real Madrid’s worst defeat in any European football competition certainly merits a mention in my book.

I just hope that Angela will forgive me for painting the result on the bodega wall!