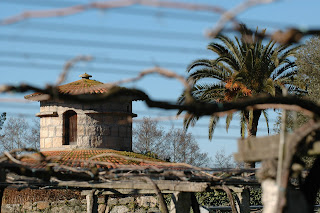 To be honest we don’t get too many comments on our blog, but recently one reader, Ryan, asked the following question:

I want to hear more about how your winters are changing or not due to climate change. Is it colder/warmer, do you see any effect on the vines?

A very good question, and also quite appropriate to post as any entry in itself. Here is how I replied:

Well, actually, my view of ‘climate change’ is simply that the weather has become more unpredictable – there appear to be more extremes of weather, but not necessarily at the times of year they are expected, in other words ‘unseasonal’.

Certainly the last two winters have been quite different, two years ago with a shortage of rainfall, and last year with plenty of rain (albeit after the turn of the year), and there have been periods in early spring when temperatures have been higher than the norm. If you look back in our blog, using the ‘WEATHER’ label, you might find reference to these.

It is difficult to say what effect this is having on the vines themselves – certainly in the last two years yields have been smaller than average, but I tend to put this down to the record crop that we had in 2006. It is quite normal for the vines to take a couple of years to recover, simply as they are exhausted from yielding such a large amount. The cycle of smaller crops following a big one is however, quite normal in any wine region.

Over an entire year it might be fair to say that the mean average temperature is possibly a fraction higher, and that our summers are getting marginally warmer. Having said that the summer of 2008 was cool and wet, and at this moment we are experiencing a spell of very cold weather (the same as much of north west Europe) …. as I mentioned previously, weather patterns are just more difficult to predict!

This is of course just my local view – a climate expert will probably tell you differently, but then again the so called ‘experts’ are always contradicting one another!