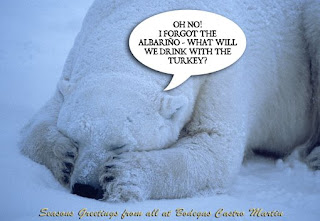 They say that the older you get, the quicker time passes – well, I must be getting very old! It seems like only a day or two ago that I started my Christmas preparations, when I sat down and wrote my Christmas cards, planned my Christmas gift list etc. And now it’s here – we are just two days away from the start of the festivities!

We are of course reminded of this by today’s singing of the Spanish Christmas Lottery, or ‘El Gordo’ (Fat One) as it is known – and yes, I did say singing. To be strictly accurate it is more a very monotone Gregorian chant that goes on for several hours – Madrid schoolchildren picking the numbers and singing them out to an expectant Spanish population. Probably the slowest, most complicated and monotonous prize draw you could ever witness. Although the total prize fund is the world’s largest (this year estimated at some 3.2 billion euros), the top prize is actually only a miserly 3 million euros. The reason that it is the biggest lottery is because there are some thirteen thousand prizes, and so, in theory at least, you have a better chance of recouping some of your losses. Now, I don’t know if this figure is completely accurate, but I have heard that the average spend on tickets is actually 72 euros per capita – the only thing that I can tell you with any real accuracy is that I have won nothing, and so will have to continue working tomorrow. Bah, humbug!
And so finally, on behalf of Angela and myself we wish all our friends and customers around the world a very merry Christmas, and a healthy, peaceful and prosperous New Year.