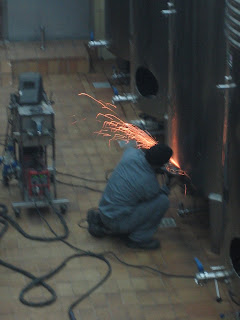 As if we didn’t have enough going on in the cellar at the moment, we now have workmen trying to repair our damaged tanks. If you have been following our blog, you will already know of the problem that we had just before the harvest when some of our tanks imploded on themselves.

So now it would appear that the only way to make a reasonable repair is from the inside each tank, and thereby lies the first problem. Our smaller tanks of 9,000 litres have only one small opening on top, so unless you employ very tall, slim engineers they’re not going to fit through the hole, and if they do, they will have to be climbing down a rope at the same time (as a ladder will not fit either)! The likelihood is that anyone with these acrobatic skills is probably already working in a circus.

The only option therefore, is to add ‘man holes’ or ‘boca de hombre’ as they are known in Spanish, before the real repair work can even begin.

I know I shouldn’t say this, but in a very perverse way, it’s lucky that we didn’t have a very big harvest. It’s always difficult enough juggling the musts and wines around the cellar during this period (making use of every spare litre of capacity), even before taking into account the tanks that either cannot or should not be used owing to the damage. Suffice to say that we will very soon need to use the repaired tanks for racking the new wines after fermentation. Fingers crossed that they will be ready……