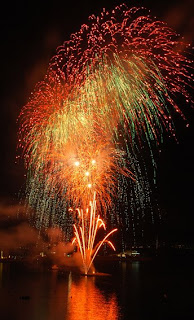 The week of 4th September is a ‘Festivo’ in our local beach resort of Sanxenxo, and this is normally celebrated, amongst other things, by a funfair, a series of concerts, culminating in a reasonably spectacular firework display. These are launced from two platforms – a large boat and a pontoon moored in the centre of the bay, and usually make a wonderful spectacle as the vivid colours are reflected against the water.

This year, instead of going up in smoke, I regret to say that owing to bad weather, the display sank more or less without trace! On the night of the festival itself the wind started to gust in the Ria of Pontevedra, and at the last moment the display was called off for safety reasons. Whilst the boat was able to scurry for shelter in a local port, the pontoon (carrying the bulk of the display) was left at the mercy of the elements.

The following morning the pontoon was found beached, partially broken up, with at least some of it’s explosive cargo scattered in the sea. Suffice to say the dramatic end to this years celebration did not really go according to plan.
After yet another week of extreme weather we can only hope for a dramatic improvement, and that we are able to gather our harvest in better conditions…..