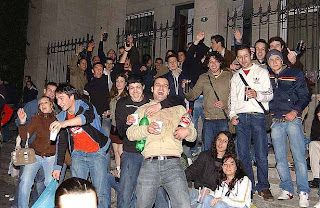 The reason that I write about the Botellón with such frequency, is of course, because it relates to drinking. Whilst many countries around Europe make attempts to tackle the unsociable behaviour of young people that surrounds heavy drinking, it seems that once again, Spain is proving the exception.

For those of you who have missed my previous posts on the subject, I will explain quickly that Botellón are basically organised street drinking parties that take place in nearly every village, town and city around Spain, every single weekend of the year. Young people stock up in supermarkets, usually with hard spirits and mixers, and drink them from large bottles (hence the name) in the street.

The old town centre of Pontevedra is a popular weekend target, and residents not only have to tolerate large crowds and the related noise problems, but also the fact that their doorsteps might easily be used as public urinals!

Rather than trying to tackle the problem head on, and persuading young people that heavy drinking is both unsociable and unhealthy, the mayor of Pontevedra (a doctor by profession) has now taken a different, slightly incredible tack….. Broadcasts on local radio, appealing to parents telling them that their children should not use the city centre of Pontevedra for public drinking, but that they should now use the official, local government approved drinking site instead. In other words, don’t stop your heavy drinking, just do it in a different place! From now on fines will supposedly be imposed for those who persist in drinking in the city centre, but in reality such threats are rarely followed through. We shall see…..

It is no secret that this new regulation is timed to come into effect just a few days after Pontevedra’s two week ‘fiesta of the Peligrina’ comes to an end.

Incidentally, you may have noticed that I made no mention of this year’s Albarino festival, held recently in Cambados. Despite being an event organised by our own D.O. we once again opted not to participate – and the reason? Well, if you bear in mind that the majority of ‘business’ is done between the hours of midnight and 06.00hrs, I will leave you to draw your own conclusion. 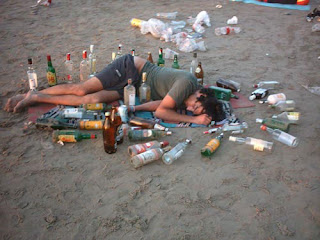 Parents – are you proud of your children?