A bridge too far (or perhaps, too near?) 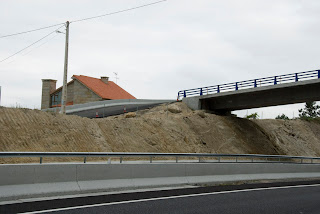 So here is the last in the trilogy of new motorway anecdotes, for now at least – my next post with be an update on progress in the vineyards, I promise.

When they originally erected this new bridge it was literally pointing straight at the roof of this house, albeit that it stopped about 15-20 metres short. Of course I just assumed that the house was awaiting demolition, and that perhaps the residents were quite naturally, putting up a fight. Not true…..

To my complete astonishment they continued to extend the road from the end of the bridge, and although it is a little difficult to make out from this photo, it turns at a sharp 90° angle. The new road now passes within probably 2 or 3 metres of the roof of the house, and any drunk motorist who does not manage to negotiate the sharp turn will certainly end up in bed with it’s occupants – and I don’t necessarily mean a hospital bed!

Wouldn’t it just have been a little easier to relocate the bridge?