The Reign of Spain! 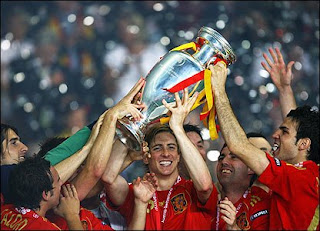 After 44 years of famine Spain’s national football team, that has so often promised so much, finally delivered….. Champions of Euro 2008 (second only to the World Cup here in Europe).

During the game streets were completely deserted, and it appeared that even the dogs had stopped barking as the entire nation sat glued to their TV screens. After 90 minutes of drama, anxiety, expectation (and some breathtaking football on the part of the Spanish), the celebration finally exploded on to the streets – and I mean exploded. Every small town and village witnessed dancing, fireworks and a cacophony of car horns as the country went completely wild. If there was ever an excuse for fiesta – then this was the fiesta to end all fiestas!

Despite being English, and the England team failing to qualify for the finals of this competition, I still feel at least slightly justified in sharing the Spanish excitement. I am a fervent supporter of Liverpool FC, who not only have a Spanish manager, but also supplied 4 of the 22 players to the winning Spanish squad. In addition, dare I mention that the scorer of the winning goal in last nights final was Fernando Torres – of Liverpool FC!