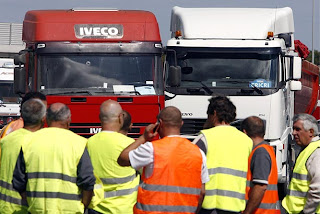 Two days into the strike and the casualty list is starting to grow, and I am not refering to business casualties – very regretably I am talking about human life. One picket in Spain, and another in Portugal have been killed as they tried to prevent trucks from running the gauntlet. In another incident a driver has been badly burned as he slept in his cab, when his vehicle was set alight. Of course this is not only a tragic waste, but also begs the question, what if anything, can actually be done to supress the spiralling price of oil? Perhaps the drivers should be picketing OPEC instead…..

It would appear that the effect on consumers varies enormously according to the area of Spain in which you live. From Madrid for example, we hear reports of shops running out of fresh food, and garages running out of fuel, whilst here in Galicia, it would appear that there has been little or no effect – so far. On Monday morning our local garage here in Barrantes had a queue for fuel, but on subsequent days I have seen at least two tankers actually delivering fuel to other forecourts in the area. Heaven only knows where these trucks came from, or how they got there, but the most important thing is that they were able to replenish stocks.

As far as I am aware there have been no reports of local food shortages, and the only real problem that we have experienced is that we are not able to deliver wine!