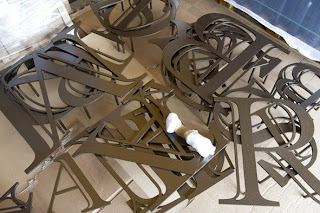 Word soup? Scrabble?
Nearly six weeks ago I wrote about the painters applying a new lick of paint to the front of the Bodega. Well, they finally completed the job at the beginning of last week, which was just as well…. On Thursday we received a call from the sign makers saying that they wanted to come to fix the new logo to the wall. They had originally promised May 5th, so naturally I was thrilled that they were prepared to install on May 9th! 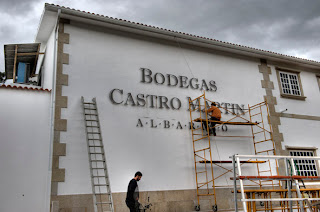 The installation team arrived at the appointed time, around mid-day, in bright sunshine. The first step, and probably the most complicated, was to set up the templates of exactly where the letters would be positioned (hopefully central to the wall, and in a straight line!). No sooner had they got these paper templates aligned, when it started to rain, completely contrary to the local forecast. I actually joked with them that it was lucky that the paper they had used was plasticised, otherwise two or three hours of precise calculation could have ended up as a soggy mess on the floor. 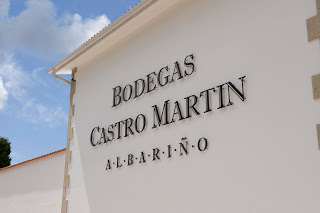 So, to cut a long story short, after a few more hours of drilling and gluing (or perhaps cementing) the new logo was finally fitted – and what an excellent job they did! The Bodega is now looking quite resplendent and will hopefully give our visitors a good impression, in keeping with the quality of wine that they will find inside…..