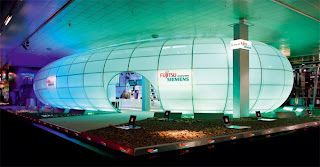 The real Fujitsu-Siemens stand
Time to come clean…… here is the definition:
April Fools’ Day or All Fools’ Day, though not a holiday in its own right, is a notable day celebrated in many countries on April 1st. The day is marked by the commission of hoaxes and other practical jokes of varying sophistication on friends, enemies and neighbours, or sending them on fools’ errands, the aim of which is to mislead or trick the unwary.

OK, so you spotted the joke.

Whilst we might be a reasonably successful Bodega, we are certainly not mega-rich, and would simply not be able to afford such an enormous pavilion at Prowein. In fact, the real truth is, that we did not even attend (as we opted to go to Alimentaria instead)

Pfallioor GmbH is of course a crude anagram of April Fool GmbH!