Don’t get your Castros in a twist…. 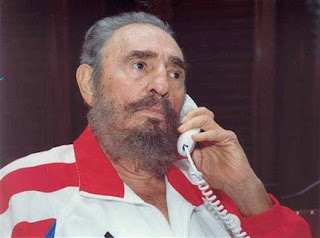 I’m wearing a lovely new tracksuit, what are you wearing?…..

Following the recent retirement of Cuba’s infamous leader, I thought it quite an appropriate moment to clear up and misunderstandings that there might be relating to our name.

Firstly, I should say that there is of course no connection whatsoever between our Bodega and the aforementioned Cuban gentleman! The name ‘Castro’ relates to a former partner of Angela’s father who left the business many years ago (for some reason, of which I am not clear, his name remained).

OK, so now the real point of my story…… In the Rias Baixas denomination there are at least three other Bodegas that carry the name ‘Castro’ in their title. Only today I passed one of the others on my way to work and remarked upon the shiny new logo attached to the front of the building – suspiciously like our own lettering, I thought to myself!

Now, I don’t wish to blow our own trumpet (well, actually I do) but we are certainly the best known of all the Castros around these parts, so I guess that it might just be possible that the others are trying to cash in on our success by using their similar name, and linking it to a similar logo? Certainly, many, many years ago I knew some consumers who used to think that anything with Mouton or Latour in the name must be a great quality wine….. as if they could somehow confuse Mouton Cadet with Mouton Rothschild for example!

So, whilst we acknowledge that imitation is really the most sincere form of flattery, there is, and only ever will be, one Bodegas Castro Martin.

We thank you for your Fidel-ity…… (sorry)!