The value of having an Advocate…. 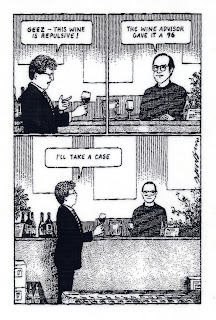 Love him or hate him Robert Parker Jr has been influencing the latest fashion in wine for nearly 30 years now. Those of you who follow my blog will know that I am not a great fan. Not because of what he originally set out to do, but more because of what he has since become.

His original idea way back in 1978, when he produced the first issue of his Wine Advocate, was simply to unlock some of the mystery of wine for the average man in the street. Using a concise rating system out of 100 points, his readers would know if (according to Parker’s taste), the wine worth buying or not. No harm in that – indeed a very good idea.

Unfortunately, over time, his publication became absurdly over-influential, not only in determining the success or failure of a particular property, but also, more importantly, influencing the style and taste of wine itself.

In Bordeaux for example, he latched on to the distinctive style of winemaker Michel Rolland as being a benchmark for the modern taste of that region. Dark, ripe, over-extracted wines were to become the order of the day, albeit that they simply did not age in the same way, or perhaps even as well as wines that were made using the more traditional ‘old fashioned’ methods. His palate was perhaps influenced by the North American style of up-front, forward, fruit driven wines. Fine if you like that sort of thing, but not so fine when, as a result, every wine maker on the planet becomes desperate to clone this modern, ‘Parker style’. Their goal of course, to glean a few more precious Parker points.

From my own experience as a buyer back in the 80’s, I also heard one or two stories about his work in Burgundy (before he farmed out tasting for that region to Michel Bettane). I was told first hand, by growers themselves, that he had rated their wine when it was actually not possible that he had even tasted it! Heaven only knows why he would chose to do that.

So, my advice in buying wine is the same now as it has always been: Sure, use a wine guide (or even better, cross-reference several) to give you some ideas, but in the end, drink what you enjoy drinking, and not what someone tells you that you should drink!