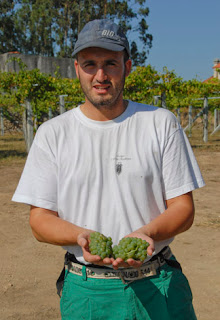 David shows off the ‘fruit of his labour’
You may recall that immediately after our 2006 harvest (in the middle of September), it started to rain. Well, I can tell you now that it almost didn’t stop raining until the end of July 2007! Hardly a complete week passed without some form of precipitation, and this included many days of torrential rain, at times reminiscent of the tropics. Indeed the month of October 2006 recorded the equivalent of six months of the annual rainfall in just three weeks! Suffice to say that I guess we had what you could honestly describe as a wet winter, spring and early summer….

Of course, such humidity levels are not ideal for grape cultivation, and it is only fair to admit that we were obliged to spray against mildew and oidium a little more than usual. Having said that, the many hours that we spent in our vineyards during the early part of the summer certainly paid dividends. By using radical ‘canopy management’ techniques imported from the ‘new world’ (yet rarely seen here in Galicia), we were able to give our fruit the best possible exposure, effectively minimising the levels of treatment needed.

This year, we should certainly make special mention of David (our vineyard manager) who worked tirelessly under Angela’s supervision, to keep our vineyards in tip-top condition – even sacrificing weekends and days of his annual leave to ensure that essential work was carried out at the optimum moment.

The month of August, as we would anticipate, provided a much-needed break from the wet conditions, although temperatures remained fairly modest. However, the character of the 2007 vintage was probably defined during the final two weeks before the grapes were actually collected. The beginning of September witnessed a welcome increase in daytime temperatures, pushing towards 30°C (86°F). Under these conditions the grape sugars received a final boost, but perhaps more significantly, the acidity was reduced to a more manageable level.

Inevitably the actual harvest date was decided by a combination of the physiology of the fruit, and the Galician weather. And so, by Saturday 15th September, with all the boxes ticked, the 2007 harvest kicked off in perfect conditions.

I always believe that the secret of any successful ‘event’ is in the forward planning, and with each passing vintage, we implement the lessons learned from previous years. In this way we hope that each campaign might be a little easier than the last! In 2007 it would appear that this philosophy paid some dividends as our well drilled team went about their business. David and Juan in charge of grape collection, Luisa in charge of grape reception, Fran in charge of the presses, and Angela and I, swanning around trying to look important…..

Actually, I lied about the last part – During the harvest my task is to stay on top of the logistics and planning, making sure that that we have people in the right places when they are needed, and also ensuring that the grapes flow through the cellar in a timely fashion. Angela, meanwhile, can be found in her lab coat, recording the quality of every single grape that enters the Bodega.

The first weekend passed off without major incident, although it soon became clear that the yields of 2007 would be well down on those of 2006. It should be remembered however, that 2006 was a record year, and so this shortfall was only to be expected, and could perhaps equate to a better concentration, and therefore superior quality. We shall see…..

In the early hours of Monday morning as we left the Bodega to grab a few hours sleep, it started to rain (exactly as had been forecast). When we woke up it had stopped, the pavements had dried, but the sky was pretty dull and overcast, with not a breath of wind. In these conditions, having looked at the water retention in the canopy, we decided to suspend picking for the day.

By Tuesday morning the sun had returned, together with a fresh breeze, so naturally we returned to the fray. Fortunately, such a small amount of water had made no difference whatsoever to the quality of the fruit, and this proved to be the only small weather hiccup of the whole vintage.

And so, after one week of picking, all the grapes had been safely gathered in, and we moved into the cellar for the more complex process of the winemaking. The next few weeks will see virtually non-stop activity as we first allow the must to settle, before racking it into clean tanks to begin fermentation. Unfortunately the natural yeasts on the Albariño grape cannot sustain fermentation by themselves, so we stimulate the process by seeding with carefully selected yeasts. After trials with several different yeast strains conducted over the last few years, we have deliberately selected a very neutral variety that allows the delicate flavour of the grape itself to dominate on the palate.

Before fermentation our first view of this year’s ‘must’ reveals a greater concentration than last year – unctuous and with a thicker consistency. The nose and palate both share aromas of peach, pear and apricot (and not as floral as we sometimes see). This rich, generous mouthfeel that originates from the high level of grape sugar, will probably produce an Albariño of around 12.5% alcohol – the same as our 2006 wine. So, despite the reduced quantity that we have produced, we have high hopes for the quality of our 2007 wine.