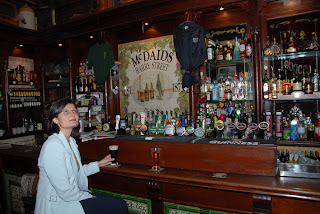 Angela discovers Guinness in one of Dublin’s oldest bars

You may have noticed a lack of posts recently, and this is simply because we have been living out of a suitcase in Ireland. Our importer recently held a series of tastings, both north and south of the border, in Belfast, Dublin and Cork – and it was a real voyage of discovery.

Not only was it an opportunity for the Irish people to learn about our Albariño, but as it turned out, it was also a chance for my wife to discover one of Ireland’s national treasures….. Guinness! I have to say that I too enjoyed the odd pint, and I can truthfully say that it tastes much better drinking it in it’s country of origin. Of course your memory of a wine (or stout) can easily be influenced, and it reminds me of the tourist who enjoys his first sip of Provence Rosé whilst sitting on a sun-soaked beach in St Tropez, eating his delicious Niçose salad. When he tastes the very same wine for a second time on a grey, wet day in Brighton it doesn’t taste quite the same.

I was also tempted to introduce Angela to another Guinness based drink – Black Velvet (a very potent cocktail of Guinness and Champagne) but I will maybe I will leave that for another ocassion. Hmmm…. I wonder if Guinness and Albariño would work? Perhaps not!