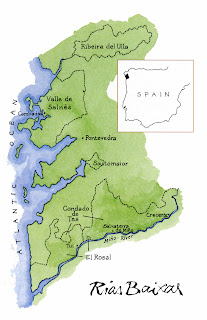 It’s true that there is a lot of snobbery in wine drinking, and we are probably all guilty of a bit of name dropping, or using the odd oenological phrase to demonstrate our knowledge. One such phrase that is sometimes used, and often abused within the wine world is the French expression
‘Terrior’ – and this does not simply mean soil or region as our dictionary might suggest.

In the world of wine ‘terroir’ can refer to any number of elements – not simply region and soil, but it can also include aspect, climate, grape variety and even the wine making technique itself. In addition to ‘terroir’ we then have the term ‘microclimate’, which can be used to narrow a vine growing region down to tiny areas or even individual vinyeards.

There is no doubt that these varying physical conditions will have an influence on the fruit (even if the same varietal), and will therefore modify the resulting wine. And after all, most wine makers worth their salt will explain that at least 90% of quality is created in the vineyard.

Within the Rias Baixas denomination, there are literally hundreds of different microclimates (which is really as a result of the way in which our tiny vineyards are distributed). However, at the risk of making sweeping generalisations, there are actually two main criteria that tend to produce distinctly different styles of Albariño. These are climate and soil…..

Although our denomination stretches barely 100km (60 miles) from North to South there can be quite significant differences in the weather, with the South being up to 1° or 2°C warmer. The South is also considerably drier – especially the inland areas of Rosal that do not enjoy quite the same refreshing maritime influences. Away from the sea summer temperatures can actually be several degrees warmer.

Rias Baixas North (sub regions – Valle de Salnés & Ribeira del Ulla)
As one would imagine the wines from the cooler Northern zones are usually not as heavy, and have marginally lower alcohol than those from the South. They have the steely, zesty, almost salt like qualities, tight structure and ‘nervosity’ often found in cool climate wines – in other words many of the attributes normally associated with the Albariño grape variety. This style is also influenced by the high concentration of granite in the sub-soil of the area that can provide an extra touch of minerality to the quality of the wine.

Rias Baixas South (sub regions – Soutomaior, Condado de Tea & El Rosal)
The additional heat of the South also provides extra sugar, and therefore alcohol – the resulting wines tend to be a little more full bodied and slightly heavier. It could be said that this fuller style is in some ways a little atypical of Albariño, and might not be the choice of the purist (I sometimes compare this to the differing styles of Chablis available from France). The sandy soils and alluvial deposits from the Miño river on the Portuguese border do not give the same mineral structure as the Northern wines, and they can sometimes be softer with lower acidity.

Of course, the wine making technique of each individual cellar will have a huge influence on the quality and style of the finished wine. And in addition, there are also cellars that buy a ‘mix’ of Albariño grapes from different sub zones in order to balance their wine, and perhaps add acidity where it may be lacking.

As I have said many times before, tasting is purely subjective and in the end it is your own tastebuds that will help you decide the style of Albariño that you prefer.