It’s official – we have wine! 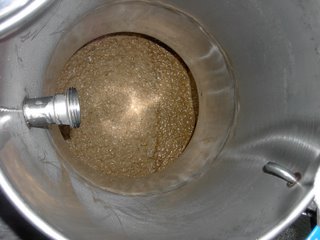 Fermenting must (photo taken at the start of fermentation)

I questioned myself the other day, at what point do I stop writing about grape ‘must’ and start writing about wine? Well, I now have the official answer…..

Apparently it is all to do with density – as the sugar is converted into alcohol the density drops, and then, at the point that the density is less than that of water, it becomes wine rather than ‘must’, or so I am told.

As at today’s date the fermentation is slowly reaching it’s conclusion, as the sugar is almost completely converted into alcohol (and CO2). Typically, when the sugar concentration is around 2g per litre or less then the wine is deemed to be completely dry, and the fermentation finished. For most palates a ‘residual’ sugar of less than 5g per litre is actually quite difficult to detect, but more than 5g can give the impression of a slightly richer wine (the average consumer can easily be seduced by this hint of sweetness). However, one of the downsides of this can be a potentially unstable wine as the remaining sugar can trigger a secondary fermentation in the bottle (done deliberately in the making of Champagne). Of course, in our region, an off-dry wine would simply not be typical of Albariño.

We are still not able to relax during the fermentation, this is a very critical time for us, as we constantly monitor and adjust the temperature according to the level of activity in the tank and the changes in density. If we simply allowed the fermentation to run out of control then we would most likely end up with a fat, flabby wine with a very short shelf life – the exact antithesis of what we are looking for, and nothing to do with Albariño.