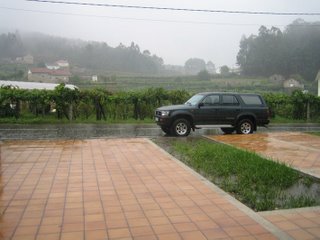 The paddy fields of Galicia

I think I wrote in one of my previous posts that the 2006 harvest was the earliest ever for our Bodega, and also that one of the factors that helped us to decide the start date was impending bad weather. With hindsight I can truly say…….. what a good decision!

Unlike last year, the latter half of September has been very, very wet and if we had picked on the same dates as in 2005, then we would have had real problems. The sad thing is that there are some Bodegas still trying to pick even at today’s date, a nightmare scenario for any grower or winemaker. No doubt there will be some variation in quality this year – in effect a vintage of two halves – those who picked before the rain, and those who picked after.

In our own Bodega our wine continues to ferment slowly under strict temperature control (I have to find out the exact point in it’s vinification that you stop referring to the grape juice as ‘must’, and start calling it wine – no doubt Angela will know) and the only problem that we have encountered recently is to our power supply. It would seem that when our own bodega and our nearest neighbouring bodega are functioning at full capacity then the local transformer has difficulty keeping up, and we suffer occasional power cuts – so much for 21st Century technology (perhaps the Spanish should allow the Germans to buy their power generating Company after all!)

Footnote: The word “paddy” is derived from the Malay word ‘padi’, meaning rice.