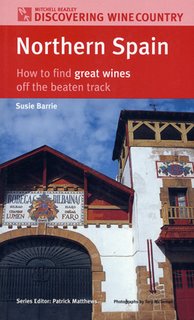 Several months ago we were visited by the English author and journalist Susie Barrie. She was busy researching a new book about the wines of Northern Spain – but not just any old book, an idea specifically targeted at “finding great wines off the beaten track”. During her exploration Susie spent a few hours at our Bodega, tasting, asking questions and generally familarising herself with our region and denomination of origin.

The finished book itself is great, and higly recommended if you are visiting the Northern half of Spain – clear, informative and easy to read, and also on the plus side, we got a very nice mention:

Galicia is still quite a rural place and if you don’t speak Spanish then getting around, using websites, arranging visits, and even ordering the right food can be challenging at best. So when the fun of it all has momentarily worn off, I’d suggest that you drop in on Bodegas Castro Martin, where you’ll find the most down to earth and friendly of English welcomes awaiting you. Andrew McCarthy’s story is the stuff of fairytales and as such it definitely merits a mention. He first visited Rias Baixas as an English wine buyer in 2001 and came to Castro Martin in search of top quality Albariño wine to sell in the U.K. As it turns out he got more than he bargained for, because he found not only the wine he was looking for but also a wife in the form of the delightful Angela Martin, winemaker and daughter of the Bodega’s founder.

In 2002 they introduced a superior wine, Castro Martin, to the range. The new wine is made entirely from grapes grown in the Bodega’s own vineyards and is wonderfully elegant with a rich lemon meringue pie nose and juicy lemon concentration on the palate.

Don’t take my word for it – buy a copy! Published by Mitchell Beazley the book is called Northern Spain by Susie Barrie, with a cover price of £12.99 (Of course this can be found quite a bit cheaper at Amazon)