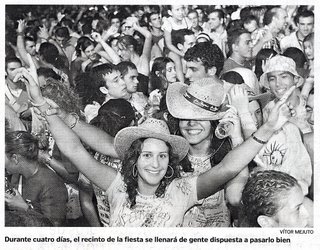 It is probably quite dangerous, and certainly not politically correct, to be critical of one’s own Denomination of Origin, but here goes…..

Every August in Cambados (the spiritual capital of Rias Baixas) we celebrate the Annual Albariño Festival. This year, for the first time in many years, Bodegas Castro Martin was conspicuous by its absence. The main reason for this is actually quite sad.

Originally the Fiesta was quite a “gentile” event, an opportunity to taste, to enjoy, and possibly even compare the wines of the region. It has always been accompanied by a certain amount of pomp and ceremony – the induction of Knights and Dames of Albariño, a prestigious wine competition, the attendance of local politicians, an odd celebrity, and always rounded off with a huge gala lunch and prize giving (regrettably none of the ceremonies are open to the public).

The backdrop to the official events is the Fiesta itself, which runs for a period of 4 days – lunchtimes, evenings and most of the night…… and thereby lays the problem.

One of the more unsavoury phenomenon that has emerged in Spain over recent years is that of the “Botellon” – basically organised groups of young people buying alcohol from shops and off-licences to drink in pre-arranged public locations, such as parks, squares, beaches etc. Of course this type of wild (and often under-age) drinking exists in many countries, but in Spain it is possible to find children of 12-14 years old drinking until 2 or 3 in the morning (and the older ones possibly all night).

So what does all this have to do with the Albariño Festival? Well, for me at least, it is perhaps just the realisation that the event seems to have lost its true meaning and direction, and is in danger of just becoming an excuse to legitimise heavy, all-night drinking.
Tasting? Wine appreciation? Forget it!

It is probably true to say that my view this year has been somewhat tainted by the events that unfolded on the penultimate night….. On Saturday evening a person that we know was at the Fiesta enjoying a quiet wine with friends, when suddenly, from nowhere, she was hit in the face by a flying wine glass, at this point you really do start to call into question the value and future of the Albariño Festival itself.

We prefer to encourage only responsible drinking, and implore you to enjoy our Albariño in moderation! 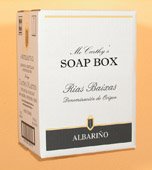 An installment from the McCarthy’s soap box series